As investors flooded into the housing market after it collapses, they brought cash with them.  At one point, 35 percent of home sale transactions were closed without a mortgage, i.e. were all-cash sales.  Home prices are up, the bargains are gone, but cash sales remain significantly elevated compared to historic levels.

In the August edition of Freddie Mac’s Outlook, the company’s economists reference recent data from the National Association of Realtors® (NAR) indicating that 18 percent of homes sold in June were all-cash transactions.  Historically, about 10 percent of home sales are for cash. 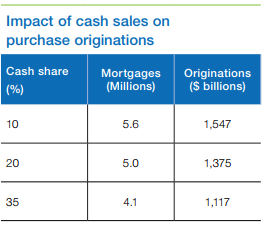 The economists say that most people do not like to invest a lot of cash into real estate because it is illiquid and has high transaction costs. However, given the current low inventories, the housing market is highly competitive and a cash offer is a good bargaining chip. The seller doesn’t have to worry about the buyer being approved for a mortgage or that an appraisal will come in below the agreed-on price. Cash offers remain more the domain of investors and for the purchase of second homes, probably in part because mortgage qualifications are tougher for these purchases and mortgage terms are less attractive.

The Outlook’s writers attempt to put a price on the still elevated level of cash transactions. Each one means one less mortgage origination they say, so predicting that share is important to projecting the volume of originations.

Freddie Mac is forecasting 6.2 million home sales this year and, if cash sales were to return to their more normal 10 percent share, that would mean 5.6 million mortgage originations.  Assuming an average loan size of $275,000 translates to a dollar volume of $1.547 trillion purchase mortgage originations. Given the NAR’s numbers however, a forecast of a 20 percent cash share is more likely.  This would lower originations to 5.0 million and the volume to $1.375 trillion, $172 billion less than if cash sales returned to pre-crash levels. Should the cash share return to its 35 percent peak, purchase originations would drop to $1.117 trillion. 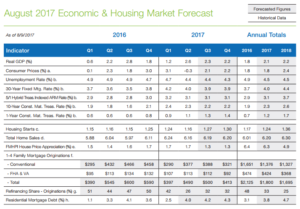 The Outlook also revisits the issue of housing supply – something that seems almost mandatory for every analysis these days – noting that the national inventory remains stubbornly below the six-month level that usually describes a balanced market.  In many hotter markets, the supply is less than two months.  At the same time, they say, mortgage rates, which have returned below 4 percent, “appear to put homeownership tantalizingly within reach.”

“The clash between the irresistible force of growing demand and the immovable object of limited supply” continue to drive prices up.  The annual growth in June was 6.9 percent.  As noted above, Freddie Mac still expects home sales to reach 6.2 million units this year, up 3 percent from 2016, but “home sales would be much higher if inventory was not so tight.”

The Outlook deems the macroeconomic climate “remarkably stable.” The 2.6 growth in the real GDP in the second quarter just compensated for the poor showing in the first quarter.  The growth now averages 1.9 percent for the first half of the year. Unemployment is at 4.3 percent, the lowest since 2001, but despite the tight labor market, wage growth has been anemic and inflation surprisingly weak.  Largely because of the latter, Freddie Mac’s economists think it likely the Federal Reserve will delay the next increase in the Federal Funds rate until its December meeting.