The Refinance Index lost 3 percent from its level the previous week dropping to its lowest level since January.  The share of applications that were for refinancing also fell, from 61.9 percent a week earlier to 58.2 percent, the lowest level since the week ended June 24, the week of the Brexit vote.

The decline in refinancing was more than offset by purchase activity.  The Purchase Index jumped 19 percent on a seasonally adjusted basis and 13 percent unadjusted.  The unadjusted index was 11 percent higher than during the same week in 2015. 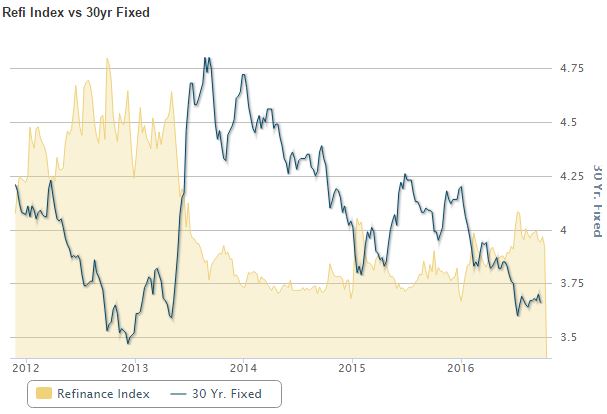 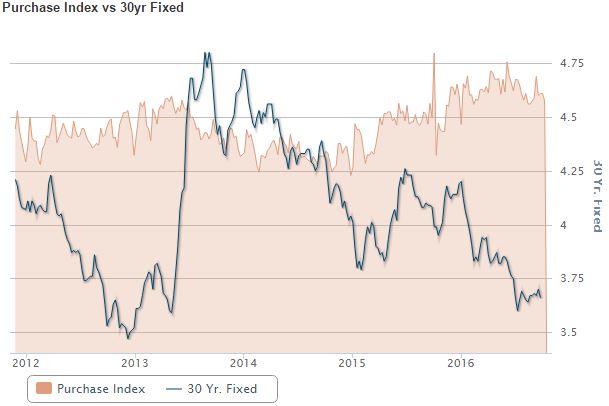 Michael Fratantoni, Chief Economist and Senior Vice President of Research & Technology at the Mortgage Bankers Association said. “Mortgage rates have continued to move higher in the post-election period, as investors worldwide are looking for increases in growth and inflation, with the 30-year mortgage rate reaching its highest weekly average since the beginning of 2016.  Refinance volume dropped further over the week, particularly for refinances of FHA and VA loans. Purchase volume increased sharply for the week compared to both last week, which included the Veteran’s Day holiday, and last year, with purchase volume up more than 11 percent on a year over year basis. The increase in purchase activity was driven by borrowers seeking larger loans and that drove up the average loan amount on home purchase applications to $310 thousand, the highest in the survey, which dates back to 1990.”

Interest rates rose on both a contract and effective basis for all mortgage products and fixed rate loans were back to levels last seen in January.  The average contract rate for 30-year fixed-rate mortgages (FRM) with conforming loan balances of $417,000 or less increased to 4.16 percent, from 3.95 percent.  Points were unchanged at 0.39.

MBA’s Weekly Mortgage Applications Survey has been conducted since 1990 and covers over 75 percent of all U.S. retail residential mortgage applications.  Respondents include mortgage bankers, commercial banks and thrifts. Base period and value for all indexes is March 16, 1990=100 and interest rate information is based on a mortgage with an 80 percent loan-to-value ratio and points that include the origination fee.