Resurgence of PMI Could Force FHA to Cut Premiums

In last month’s Housing Finance Chartbook the Urban Institute showed how a recent surge in issuance of private mortgage insurance (PMI) had come at the expense of the Federal Housing Administration’s (FHA’s) Mortgage Insurance Fund (MIF). PMI grew from a 33 percent share of the market in Quarter 1 of 2016 to 38 percent while FHA’s share declined from 41 to 34 percent. This reversed a move toward FHA loans that occurred in early 2015 when FHA reduced its insurance premium by 50 basis points.

PMI’s volume of origination increased in the second quarter by 56 percent to $72 billion, the highest quarterly volume since the first quarter of 2008. When it reported this, the Urban Institute noted that, “if the shift back to PMI takes away a significant part of FHA’s lower credit risk business it could put pressure on FHA’s balance sheet, possibly pushing the agency to lure higher quality business back with another premium cut.” 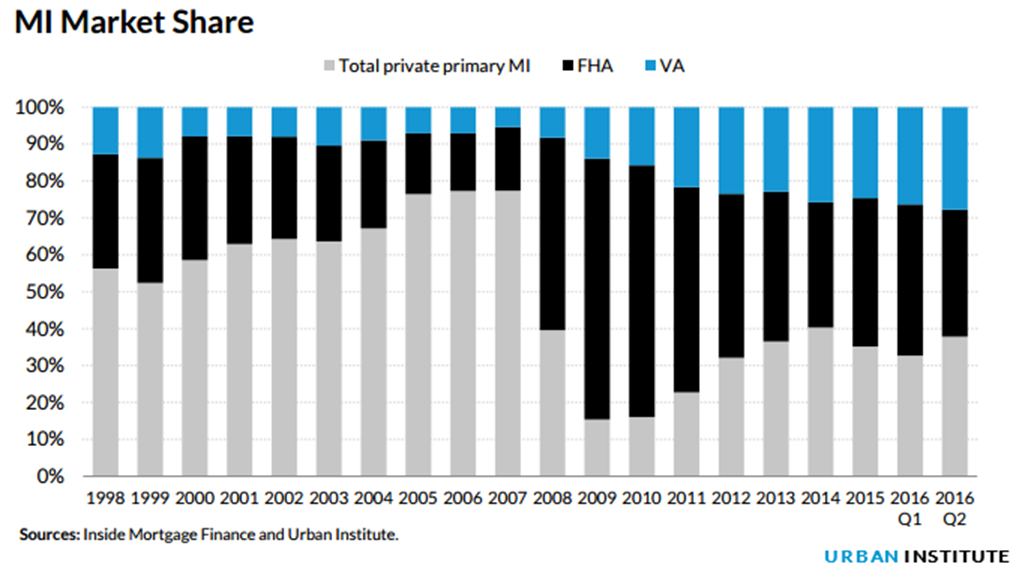 In an analysis released on Thursday Institute Research Associate Karan Kaul says the return of PMI as the number one player is “big news: in an era when government is backing most mortgage originations, any increase in the role of private capital is welcome.” But will the FHA be forced to drop its prices to avoid overexposure to higher-risk borrowers? “Probably not anytime soon,” he says, “given the pristine quality of today’s mortgages.”

Mortgage insurance makes it possible for lenders to write low downpayment loans by guaranteeing the recovery of some of their money should borrowers default. PMI writes insurance for conventional mortgages while FHA (and VA, although its market is limited) guarantee loans for their lenders

Kaul says that in 2016 there has also been an increase in originations by large lenders of low-downpayment mortgages outside the FHA due to new programs from the GSEs (Fannie Mae and Freddie Mac.) These products allow for down payments as low as 3 percent along with reduced mortgage insurance. While these loans were introduced nearly 20 months ago there was no big move toward them because FHA still had a price advantage. The April restructuring of PMI premiums changed this, giving lenders an alternative. This, he says, was especially appealing to those “already wary of the FHA’s heavy enforcement.”

Kaul says if the pricing for PMI continues to appeal more to high credit borrowers it will, over time, pull the best customers out of the government into conventional mortgages, leaving FHA with a riskier mix of borrowers. If the mix becomes too risky them FHA might have to consider another rate cut. However, he concludes that given the high-quality of originations at this time and the very low delinquencies, “It will be a while before these risks rise to a level that causes the FHA to lose sleep.”