Home > All Posts > Uncategorized > The bank that rejects the most mortgages

The bank that rejects the most mortgages

The likelihood that a mortgage application will be approved varies widely by bank.

Home-buyer rejection rates ranged from 11% to 34% in 2012 at the 10 largest mortgage lenders, according to data released this month by the Federal Financial Institutions Examination Council. Those who applied for a mortgage at SunTrust /quotes/zigman/242272/quotes/nls/sti STI +1.04%   faced the lowest rejection rate—3,831 out of 34,749 applications were denied—while those at Chase encountered the highest rejection rate, with 26,894 out of 80,036 (a third) not passing muster. Despite the fact that large lenders sell most of their mortgages to government agencies, many require applicants to clear hurdles that surpass federal guidelines, and they do so in degrees that vary by institution, resulting in confusion for applicants. Home buyers who get rejected for a mortgage at one large bank could get approved at its competitor—assuming they know not to give up the search. “It absolutely makes a difference where you go,” says Stu Feldstein, president at SMR Research, a mortgage-research firm. 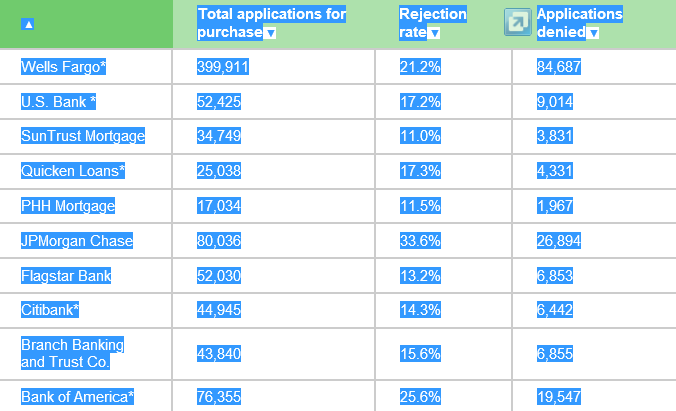 Since the housing downturn, most banks have been selling the mortgages that they originate to government-backed agencies. These groups, including Fannie Mae /quotes/zigman/226360/quotes/nls/fnma FNMA -1.35%  and Freddie Mac /quotes/zigman/226335/quotes/nls/fmcc FMCC -2.13%  , set the minimum guidelines—including credit score, down payment, and debt-to-income ratio requirements—which lenders must follow when determining whether to approve a mortgage applicant. Housing experts say if large lenders stuck to that rubric, they would all have similar rejection rates. They vary widely, however, in part because most lenders add an extra layer of requirements on top of the federal guidelines, says Feldstein.

Banks’ additional requirements stem from the housing downturn when government agencies returned mortgages that banks had sold to them after borrowers defaulted. This was done on the grounds that the loans were poorly underwritten or because of other violations. Referred to as mortgage buybacks, they fell to their lowest level in four years during the second quarter of this year, according to Inside Mortgage Finance, a trade publication. But experts say many banks are sticking to their additional requirements to avoid new losses. “[They’ve made] decisions about whether they want to skate right on the edge of those guidelines or be in a comfort zone,” says Stuart Gabriel, director of the Ziman Center for Real Estate at the University of California, Los Angeles.

Of course, mortgage-rejection rates have come down significantly since the recession, when lenders pulled back on mortgage originations in the face of rising foreclosures. In 2009, rejection rates among most of the lenders on this list ranged from 13% to 70%. Two lenders—SunTrust and PHH Mortgage—had lower denial rates than in 2012. That disparity was not surprising then since lenders sold most of their mortgages to private investors who collectively accepted a wide range of underwriting standards. 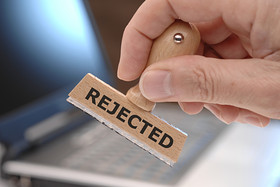 To be sure, housing experts say recent rejection rates could vary greatly among the banks because of the types of mortgage applicants they’re receiving. For instance, lenders who receive a greater share of borrowers with lower credit scores or income, or higher debt, are more likely to have high rejection rates. In some cases, the banks’ existing customers could be contributing to higher rejection rates. Chase and Bank of America, which had the highest rejection rates in 2012, have subprime borrowers that they acquired when they bought Washington Mutual and Countrywide, respectively. If those borrowers tried to buy another home, it’s likely that they turned to these banks since they already had a relationship with them and were denied because of their poor credit, says Feldstein. A spokesman for Bank of America says the bank’s denial rates have been consistent over several years, ranging from 20% to 25%, including prior to the Countrywide merger. Chase did not respond by press time.

In many cases, however, borrowers face rejection rates that are even higher than the numbers on this table show. Home buyers typically have to answer a laundry list of questions about their finances before they even make it to the actual mortgage application. Many would-be applicants are denied before they even sign an application, says Guy Cecala, publisher of Inside Mortgage Finance. Some lenders will deny a large chunk of home buyers in the preapproval process. For instance, excluding preapprovals, Wells Fargo /quotes/zigman/239557/quotes/nls/wfc WFC +0.42%  denied roughly 12% of applications; with preapprovals, the rejection rate jumps to about 21%.

Separately, a large number of applicants never get approved or denied. More than 71,000 applications or 8.6% of all applications among the top 10 lenders in 2012 were either withdrawn or closed because they were incomplete, according to the FFIEC data. These cases include borrowers who couldn’t produce income documentation or meet some other requirement that awaited them and walked away from the mortgage request.

For home buyers, the findings underscore the importance of casting a wide net when shopping for a mortgage. In addition to contacting individual lenders, consider speaking with mortgage brokers who work with a variety of lenders and can give would-be borrowers an idea upfront of whether they can get approved. And just because buyers are denied, that doesn’t mean they should stop the search.

Going forward, it remains to be seen whether the range of rejection rates will widen even more. As banks slowly increase their number of portfolio mortgages—which they keep on their books rather than sell to government agencies—the terms that borrowers have to meet could differ even more from one lender to another. (With portfolio mortgages, lenders set their own terms for the entire approval process.) Separately, now that mortgage rates are rising and refinancing activity is falling, lenders are becoming more eager to generate new mortgages, experts say, and some may approve more applicants than they are currently.